This is a festivity that originates in the XVI century, during the founding of the New Spanish city of Oaxaca, or Antequera as it was known. The fiesta was celebrated on the first Monday after the 16th of July and was then repeated on the following Monday. These dates concurred both with the ancient pre-Columbian calendar in the days that were dedicated to their Goddess of Tender Corn, Centéotl, and with the Christian calendar that celebrates the corpus of Virgin Mary of Carmen on those same days.

This fiesta took place on the hill that ancient Zapotecs called "Dani Na Yaloani" which means "hill of beautiful view". The fusion of the Indian and Spanish customs along with the efforts of the Dominican Friars to establish Catholicism, originated joyous and spectacular outdoor liturgical services that facilitated the transition towards evangelization and also brought great fun and excitement to everyone. This is the origin of the present day celebrations of Mondays of the Hill or "GUELAGUETZA", a Zapotec word and tradition in which people help each other by cooperating with reciprocity as an only payment.

The Guelaguetza is given on those two Mondays of the hill by dance groups that represent the 7 regions of the state of Oaxaca which are: The Central Valleys, The Sierra Juarez, The Cañada, Tuxtepec, The Coast and The Isthmus of Tehuantepec. Each performance presents an example of their cultural heritage through their dances, their own music, songs in their different languages and dresses that are unique to each region. At the end of each group's performance, their "Guelaguetza" will be thrown to the crowd in the formm of traditional fruits, sweets, drinks and objects from each region. Be careful an iguana or a flying pineapple doesn't hit you on the head!
On both Mondays, at 5 a.m. special traditional flutes announce the event as everyone begins to walk up to the auditorium on top of the hill and at 10 a.m. the grand dance performance of the Guelaguetza begins. That same night in the same auditorium you can watch the Legend of Princess Donají, daughter of Zapotec King Cosijoeza and Aztec Princess Coyolicatzin. Inbetween both Monday performances, there are multiple cultural activities that take place in different parts of the city, such as: concerts, mezcal fair, gastronomical/food exhibition, sweets/desserts exhibition, textile exhibitions & sales, craft exhibition and sales, dances, etc.

Other events have been added to these festivities. On the two Saturdays before each Guelaguetza, in the morning on the main plaza, there is a contest in which a representative of the Goddess Centéotl is chosen that will honor the weekend events. This isn't a beauty pagent but rather an election of the girl that knows best the cultural heritage of their region and its people. Those same afternoons, a colorful parade takes place in which all the members of the dance groups from the 7 regions will introduce themselves in the city with their best outfits and dance as they march led by their brass bands with firework displays that enliven the city. Then the two Sundays that precede the grand event at night takes place the spectacular "Bani Stui Gulal" which means "repetition of the ancient". This is a performance that explains the history of these celebrations through time and always ends with an amazing fireworks display. 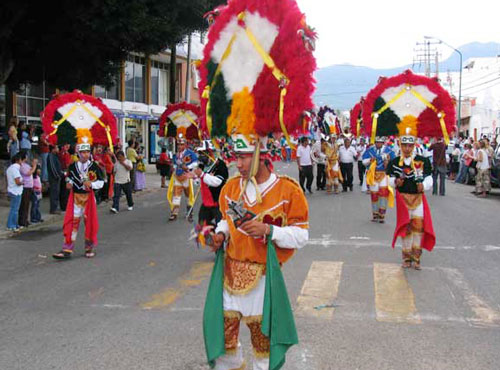 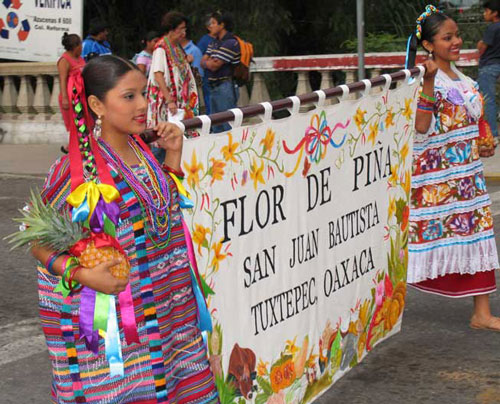